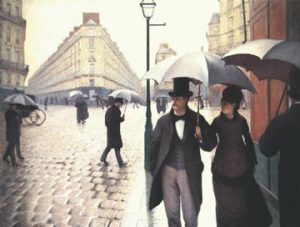 Gustave Caillebotte may well not be the most famous of the French Impressionist painters. Born in 1848 and trained as a lawyer, he was also a naval architect, a sailor, a philatelist, a horticulturist — and a millionaire. In addition to being known as a generous benefactor to his fellow painters, he was an important collector whose Cezannes, Degas, Manets, Monets, Pissarros, Renoirs, and Sisleys he left to France upon his death. The bequest was initially rejected but with some reluctance was finally accepted, and today forms the core collection of the Musée d’Orsay. He lived with his mother except for the last six years of his life, never married, and after dying suddenly of a stroke in 1894 at the age of 45 left a bequest to Charlotte Berthier, said to be his mistress. Until relatively recently, his philanthropy and largesse have overshadowed his own painting.

In 1986, The National Gallery of Art, Washington and the Fine Arts Museums of San Francisco organized The New Painting: Impressionism 1874-1886 which celebrated and recreated the eight group shows known as the Impressionist exhibitions. Here, in historical context, the work of Gustave Caillebotte was represented by well over a dozen canvases. Amidst the still lifes, landscapes and interiors of the other Impressionist painters, images of women predominate. But something was different in Caillebotte’s work, which also includes these other genres: it is his view of men. Asking several of my friends if they noticed any thing “queer” in Caillebotte’s work, I received a unanimous and enthusiastic “Of course!”

In 1994, to commemorate the centennial of his death, the Musée D’Orsay, Paris and the Art Institute of Chicago organized Gustave Caillebotte: Urban Impressionist. The exhibition and its catalogue promised “new information and insight regarding one of the most engaging painters and proselytizers of the Impressionist movement.” I eagerly anticipated the exhibit in its installation at the Los Angeles County Museum of Art.

As the catalog essay laments, “Since the artist is dead, no amount of documentation will ever recapture a complete reckoning of his view of the world, or understanding of him as an individual. We can compile in denser and finer-grained detail analytic accounts of the things he shared with others, from the available conventions of perspective to the character of his arrondissement; but the very things that we sense are crucial to the impact of the most personal pictures — the motivations for the choice and framing of the subject, the decisions as to what to put in and what to leave out, and so on — are the contingent elements of his private individuality on which we can only speculate without hope of confirmation.”

Repeated references to Caillebotte’s “difference” — often framed in terms of “modernity” — seemed to dance around what I was feeling about these canvasses. The suggestion is never overtly put forth that there is any form of homoeroticism in evidence. Though I have read nothing in his biography to explicitly suggest that Caillebotte might have been homosexual, to look at his paintings and not pose this question seems absurdly myopic.

As Emmanuel Cooper states in The Sexual Perspective, “The knowledge that an artist was or was not homosexual is not intended to ‘explain’ their work nor is it to suggest a particular context in which to view it. It is, rather, the start of a process to look again and recover what has traditionally been omitted from the history of art using this to inform the present. What we can do most profitably is re-examine the work and lives of artists to search out from secrecy, prejudice, distortion and myth the homosexual presence and its wide significance in identifying homosexual expression.”

In this essay, I am — like Arthur C. Stone, Jr. in his unpublished 1990 essay, “The Invisible Male, or Gustave Caillebotte Gets Sexy” — asking you to follow art historian James Saslow’s advice to “trust your eyes: the gay viewer is usually far more open to suggestions of gay emotion than the art ‘experts’.”

In Caillebotte’s first major canvas, The Floor-Scrapers, men are depicted laboring in a bourgeois apartment. Kneeling, their arms extended before them, their torsos bare, the men are depicted in remarkably submissive poses. “This choice of subject constituted a deliberate challenge to official doctrine” and the canvas was rejected by the jury of the 1875 Salon. Caillebotte’s motivation in refusing to observe the acceptable depiction of workers by incorporating them “into ancient, Italian, Moroccan, or Breton subjects” is left unexplored in the catalog essays.

The object of the worker’s gaze in House-Painters is peculiarly ambiguous; is he surveying the paint or the painter?

The immediacy of Caillebotte’s gaze can be felt in Oarsmen in which the viewer is actually in the boat being rowed by the men with exposed arms.

In Périssoires, the viewer feels he is on the river, part of an all-male outing.

Bathers, depicting men in bathing costumes cavorting comfortably as a boat drifts by in the distance, only adds to this sense of homosocial activity.

In Boating Party (Oarsman in a Top Hat), “Caillebotte is even closer to his model… as though only the rower’s feet prevented him from moving closer still.” The fact that the viewer’s gaze is directed at the Oarsman’s crotch goes unmentioned.

In discussing The Pont de L’Europe, Julia Sagraves writes that “… the flâneur [loiterer] is apparently distracted by the fashionably dressed woman he has just passed, who, in turn, seems to glance suggestively toward him. Importantly, competing with this implied sexual exchange in The Pont de L’Europe however, is a social one: the flâneur appears equally if not more, distracted by the figure of the worker in whose direction he seems to stare.” Why is the male-female exchange assumed to be sexual and the male-male interaction social? From my perspective on the bridge, it is obviously just the opposite.

In the examination of The Pont de L’Europe (Variant), a class analysis is finally put forth. “Their faces hidden from view, these men appear to be anonymous figures, ‘everymen’ of late nineteenth century Paris. Their contrasting attire, however, is evidence of their class difference…” The top hats and frock coats of the two gentlemen are markedly different from that of the third figure. He wears the blue smock of the working class though “his conspicuously fashionable bowler suggests his upward mobility….” In 1914, E.M. Forster finished a draft of Maurice which concluded with Maurice, a member of the middle class overcoming social, to say nothing of sexual, barriers to live happily (we presume) with Alec, the gamekeeper. I see a similar dynamic here: this looks to me like a scene of men crossing class boundaries as they cruise one another.

Let’s go back inside, where, the catalog tells us, “These interiors reveal a different gendering of spaces, where the man is absorbed into the domestic sphere and where the woman is not a mere decorative motif.”

“In comparison with what could be termed his conventional (“masculine”) likenesses of men and women — seated front and center and framed by wooden moldings or the edges of pictures — this [Portrait of a Man] is a decidedly uncommanding, decorative, “feminized” and thus complicated portrait.”

In Self-Portrait at the Easel “a man whose features are indistinct reads on a sofa: this studio is not an isolated retreat, but a room in which a friend could feel at ease.” Or a lover, I feel compelled to assert.

Finally, the most overt break with contemporary iconography: the male nude in such canvases as Man at his Bath. “Caillebotte’s challenge to the male gaze is all the more flagrant in the large picture of the standing male nude drying his back. In these paintings Caillebotte focused on what is either a dressing room or bathroom, both of which traditionally were reserved for feminine activities of washing, dressing, and putting on make-up. But these nude men are not just toweling off after a bath. They have taken a bath that Caillebotte has witnessed, or staged to look as if he had done so, and are now being observed by the male onlooker. If the female body was the territory of modernity as a sign of male sexuality, what is one to make of Caillebotte’s naked males which break iconographically and ideologically from the norms of nineteenth century art and literature. Who were these men? Were they friends of the artists or part of his household staff?” Who, indeed?

My aim here is not one of reductivism. It is not for me to determine whether or not Gustave Caillebotte might have been homosexual (whatever that means), but I do wonder why art historians are failing to ask questions in an effort to illuminate aspects which obviously distinguish his work from that of his contemporaries. Indeed, the issue is repeatedly circumvented: “Caillebotte adhered to the patrician attributes of a code of family honor, and the cult of male friendship… Caillebotte’s images suggest that he was uncomfortable with his class as his social identity.” and “Here is neither drama nor anecdote, no relaxation of defenses even within one’s private space. Caillebotte suggested instead a pervasive melancholy and uneasiness that are all the more surprising in the context of the domestic and familial setting.”

In the light of the recent proliferation of queer studies, this omission seems odd to say the least. I would hope that future examinations of Caillebotte’s oeuvre include an exploration of the “queer” gaze so abundantly evident in his work.