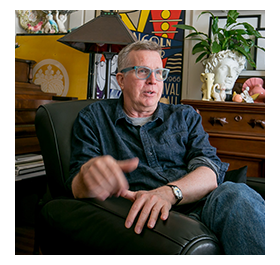 Frederic Allen Sawyer, Jr., was born on January 1, 1957, the middle of three children adopted by Dianne and Frederic Allen Sawyer, Sr., and grew up in Moraga, a prosperous suburb of San Francisco. Sawyer dropped out of San Francisco State University’s Drama Department in the late 1970s to work full-time as the manager of the Castro Theatre, a 1920s movie palace that had recently begun programming classic Hollywood repertory. Sawyer often dropped in to watch the double bills, postponing his managerial duties until late into the night. While working there he met Vito Russo and contributed to the revised edition of Russo’s pioneering The Celluloid Closet: Homosexuality in the Movies.

In 1981 Sawyer parlayed his now-vast knowledge of Hollywood’s golden age into A Fine Romance, a musical revue of Jerome Kern songs, which was the inaugural show of the Valencia Rose and ran for nearly a year. Sawyer also briefly performed stand-up comedy at the club, which had quickly become an unofficial community center as well as an important venue for emerging performers including Whoopi Goldberg, Marga Gomez, and Lea DeLaria.

John F. Karr, theater critic of the San Francisco gay weekly Bay Area Reporter, impressed with Sawyer’s handling of the Kern material, invited him to collaborate on a chamber musical piece of John O’Hara poems set to original music. Titled Talking to the Sun, it shared a double bill with Gertrude Stein and Al Carmine’s In Circles, both directed by Sawyer and Karr at the Theatre Rhinoceros. The success of this collaboration led to a series of centennial concerts for composers and lyricists Irving Berlin, Cole Porter, and Ira Gershwin, which played at the Plush Room and the Great American Music Hall.

The team guided new musicals at Theatre Rhinoceros. Dirty Dreams of a Clean Cut Kid, with poems by Henry Mach set to music by Paul Katz, dealt with the thoughts and fears of gay men in a public health clinic waiting room anticipating the results of their HIV tests. Some Men Do offered an exploration of gay subtext in the theater songs of Leonard Bernstein, Marc Blitzstein, Cole Porter, Lorenz Hart, and others. Sawyer and Karr also developed and directed solo shows for many of San Francisco’s drag performers such as Paul Anelli (aka Miss Androgynous) and the “Incomparable Bambi Lake.” Their reputation as directors of drag led to their hiring by the ArtFull Circle Theatre company, recently transplanted from Chicago. With an original score by Mark Sargent, Jungle Red was an unauthorized musical version of the MGM film of Claire Booth Luce’s The Women. Sawyer rewrote the direct transcription of the film script into a more theatrically viable book without losing the snap and panache of the MGM original.

Without Karr, Sawyer continued to work with the ArtFull Circle. He and Paul Anelli adapted the ArtFull Circle’s play Christmas with the Crawfords, a Grand Guignol version of Joan Crawford’s legendary 1944 Christmas Eve radio broadcast. Working from an idea by Richard Winchester and a script by Mark Sargent and Wayne Buidens, Sawyer and Anelli imbued their new script with references and interpolations from the full canon of Crawford’s work as well as from other Hollywood camp staples. Christmas with the Crawfords went on to become the company’s most successful production, revived annually in San Francisco and performed in Los Angeles and off-Broadway.

Sawyer wrote the books to the subsequent ArtFull Circle musicals Way Out West, borrowing from the films of Mae West, and Women’s Prison Christmas, which combined plots from the films Women’s Prison, Caged, I Want to Live, and other films. Both shows had original scores by Mark Sargent. Sawyer also adapted the RKO film version of Edna Ferber’s Stage Door into Those Damn Calla Lilies.

Sawyer’s ArtFull Circle scripts succeed whether performed by women or men in drag; gender is rarely the joke. But sometimes gender casting was used for effect. For example, in Jungle Red, the real women played all the shop girls, servants, and menials, while the drag queens played the privileged protagonists. The all-female cast of Women’s Prison Christmas was decked out in the wigs and outrageous costumes usually reserved for drag queens.

As with many drag theaters, adaptation and downright plagiarism were done without securing any rights. The popularity of ArtFull Circle’s productions brought attention resulting in several cease-and-desist notices from the Ted Turner organization, which owned the copyrights on most of the source material. And a dispute over royalties for out-of-town productions of Christmas with the Crawfords caused Sawyer to sever his relationship with the ArtFull Circle and his name to be removed as author, although a significant portion of his contribution remains in the currently performed versions of the play.

Sawyer was now working as the general manager for the San Francisco Actors Theater, a ninety-nine-seat venue connected with the Jean Shelton Acting School. For the company, Sawyer codirected Joe Pintauro’s Raft of the Medusa and directed Reassurance, an adaptation of three Allen Gurganus short stories.

Hot Pants Homo began as a thirty-minute piece performed at a New Works Festival at the Cable Car Theater in 1996. After the strong audience response Sawyer developed the piece into a seventy-five-minute one-act that premiered at the Lavender Lounge. In the original novel by Percy Fenster, Wayne, a ruggedly handsome jazz musician, beats up the men he sleeps with and ends up bedding his female psychiatrist. In Sawyer’s play the “Jazzman” has a succession of failed homosexual encounters with partners, and it is not until he learns to be confident in his own sexuality that he finds the perfect partner who initiates him into the joys of gay sex. Performed by a cast of five actors dressed in black with no sets or costumes, what gives the piece its zing is “how the visuals play off the hyperlurid narration spoken by the characters around their own dialogue”(Dodds, “Jocks” 31).

With his cast, Sawyer formed the Hot Pants Homo Players and began writing with the troupe in mind. Almost immediately the company was put on hold when producer Michael Bruno approached Sawyer about devising a show from Tom Orr’s gay parody lyrics of Broadway show tunes, resulting in Dirty Little Showtunes, which had successful runs at three different San Francisco venues and productions in Seattle and Chicago.

During the run of Kaufman’s play, Sawyer began writing a parody he called Gross Indulgences: The Trials of Liberace. Mimicking Kaufman’s style, Sawyer used excepts from actual court transcripts of Liberace’s numerous libel trials, as well as from three of Liberace’s “autobiographies,” his former lover Scott Thor- son’s tell-all Behind the Candelabra, a defensive missive by Liberace’s mother, and articles from magazines like Hush, Hush and Confidential. While Kaufman ended his play with a Wilde poem, Sawyer ended his with a recipe from Liberace’s cookbook. The parody soon took on a life of its own, becoming a touching portrait of the closeted performer. By contrasting, juxtaposing, and overlapping various people’s versions of the same event, Sawyer uncovered a deeper understanding of the truth. Gross Indulgences enjoyed a successful run at the New Conservatory Theater in fall 1998.

In 1999 Sawyer wrote Senator Swish, a follow-up to Hot Pants Homo. Once again he subverted the original novel by Aaron Thomas, transforming the story of a senatorial candidate whose homosexual tryst is used to blackmail him into dropping out of the race. In Sawyer’s version the homosexual blackmailers ensure the Senator’s election and blackmail him into passing “the gay agenda.” The play ran at Josie’s Cabaret, successor to Valencia Rose, and played in repertory with Hot Pants Homo, which had been augmented with several new scenes.

In 2000 Sawyer returned to the Hollywood-pastiche drag style for Whatever Happened to Sister George?, a lesbian spoof that started with elements of The Killing of Sister George, All About Eve, and Whatever Happened to Baby Jane? and interwove many lesbian clichés from Vito Russo’s Celluloid Closet to form a plot that paralleled the recent coming out of Ellen DeGeneres. Performed by five women at Theater Rhinoceros, the play attracted both gay and lesbian audiences due to its “crossover appeal combining a camp gay sensibility with a story populated with lusty libidinal lesbians”(Winn E5).

In 2002 Sawyer wrote and directed Lavender Lockeroom, the third and final of his pulp trilogy. Based on The Devil Is Gay, abandoned after the first chapter, Sawyer created his own original pulp play. The success of Lavender Lockeroom can be attributed to the pro-gay message layered over the hilarity. Sawyer lovingly refers to his pulp plays as “pornographic after-school specials” and claims that “the protagonist never finds happiness until he completely accepts his homosexuality”(author’s personal interview with Sawyer, 28 Apr. 2002).

Despite the success of his many productions in San Francisco over two decades, Sawyer as playwright remains relatively unknown. Several critics, however, understand and appreciate his work. Of Sister George, Erin Blackwell writes, “Sawyer’s innovation…lies in having iconic characters replay immortal moments not for their absurdist value, but to recuperate pulp archetypes, lovingly, as misguided attempts to express a forbidden existence. Stitching together movie quotes with topical references allows these weird sisters to live again, comically, subversively, in a pro-sex, lesbian-friendly context. The sophistication of this approach cannot be overstated”(“Starfuckers”33).

Richard Dodds, who has included on his annual roundup of the year’s best plays both Senator Swish and Gross Indulgences, wrote of the latter, “Gross Indulgences is not a one-joke play. There are insights into how society so easily tormented those who did not play by the rules of masculinity, and to what lengths an entertainer felt the need to fabricate the appearance of heterosexual interests… [T]he play demonstrates the impressive fortitude Liberace must have possessed to survive and triumph over the taunts we learn began when he was a child”(“Liberace”44). Dodds explicates as well the subtext of the pulp plays: “Lavender Lockeroom probably reflects, at least to one degree or another, the experiences of most everyone who winds up gay. It must be those flashes of shared reality that so enliven the humor in this show”(“Jocks”31).

Winn, Steven. “Sister George Has Some Life Left in It: Over-the-Top Production at Rhinoceros.” San Francisco Chronicle 29 May 2000: E5