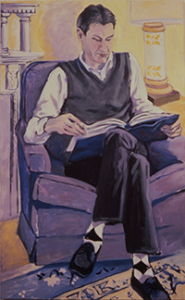 Jim Van Buskirk was born in Los Angeles, grew up in Buena Park, California, and lived for a few years in Bellevue, Washington. A resident of San Francisco since 1972, he currently lives on Potrero Hill. Jim earned a bachelor’s degree in Sociology in 1977 and a Master’s of Information and Library Science in 1981, both from University of California, Berkeley. As part of his course work, he helped develop and install “Out of the Closet,” an exhibit sponsored by the Pacific Center for Human Growth, at public and college libraries throughout the Bay Area. An account of the project, “On Display: Presenting Gay Culture in a Library Setting,” appeared in a special issue of Catalyst: A Socialist Journal of the Social Services (No. 12, 1981).

In 1991 he began working to develop the James C. Hormel Gay & Lesbian Center at the San Francisco Public Library. To coincide with the April 1996 opening of the Gay and Lesbian Center, he co-authored with Susan Stryker Gay by the Bay: A History of Queer Culture in the San Francisco Bay Area (Chronicle Books, 1996), which was nominated for a Lambda Literary Award.

Under the auspices of the Hormel Gay & Lesbian Center, Jim was responsible for many exhibits and public programs. In addition, he conceived of the “Reversing Vandalism” project, which was featured in the documentary, Not in Our Town: Northern California (Working Group, 2005). He also contributed to the exhibition and catalog Out at the Library: Celebrating the James C. Hormel Gay & Lesbian Center, San Francisco Public Library (SFPL, 2005) which toured the country. He also curated “The Lesbians of The Ladder: Courage Under Attack” (GLBT Historical Society, 2014) “Gayborhoods: Lost Queer Landscapes” (GLBT Historical Society, 2014) “Queerest. Library. Ever.” (San Francisco Public Library, 2016) “Queer as German Folks” (Goethe Institute, 2019) and co-curated “The Cockettes: Acid Drag & Sexual Anarchy“ (SFPL, spring/summer 2022).

In 1996, Jim was one of ten library professionals nominated for a special award commemorating the twenty-fifth anniversary of the founding of the Gay Lesbian Bisexual Task Force of ALA. In January 2000 Jim was invited by the Getty Research Institute for the History of Art and The Humanities to participate in the workshop “Curating Community.” As a result of contributing book and video reviews to Library Journal from 1981 to 2000, Jim received the first Library Journal Reviewer of the Year: Nonfiction Award in June 1997. He was named one of the Friends of the San Francisco Public Library’s Literary Laureates in April 2006.

“A Queer Career,” chronicling Jim’s path to become Director of the Gay and Lesbian Center, appeared in Liberating Minds: The Stories and Professional Lives of Gay, Lesbian, and Bisexual Librarians and Their Advocates (McFarland, 1997) and his oral history “Out of the Orange Groves” appears on the “Gay Bears: the Hidden History of the Berkeley Campus” Web site. “Gender Changer” is included in Out Behind the Desk: Workplace Issues for LGBTQ Librarians, edited by Tracy Nectoux (Library Juice Press, 2011).